By using soeport.se, you consent to us gathering data. Under the sections in our Privacy Policy about how we process your personal data and about cookies and Google Analytics we explain what data we gather, why we do it and what we use it for.

At the beginning of November, the Port of Södertälje was visited by the Swedish Maritime Administration’s Director General, Katarina Norén. It was her first visit to the port and she was very pleased with what she saw and experienced.

– It was really exciting to see the operation, says Katarina Norén, who among other things visited the ship Baltic Borg, which was in harbour. 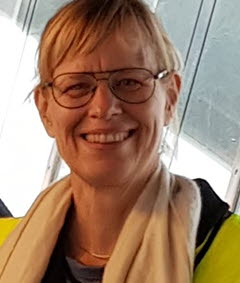 What do you know about the Port of Södertälje?

Everything seems to be in very good order here. Good infrastructure and a strong focus on the customers. The future plans look exciting for the Port of Södertälje.

What challenges is shipping facing in the future?

Creating sustainable transport and keeping costs down. The trend of cost increases in shipping is inhibiting the development of sea transport and makes it difficult to compete on equal terms with other transport alternatives.

Something else that affects many ports is that ship sizes are increasing. This in turn demands larger ports, but at the same time as ports are investing and expanding, ships are making fewer calls. In 10 years the number of arrivals has decreased by a quarter.

Are there any other areas that will change in the future?

Shipping is moving towards being increasingly digitalised and autonomous, but there is a very great deal to do in these areas. Previously, it was the connections out at sea that stood in the way of digital development, but that is not the problem today.

Today it is up to the businesses themselves to adopt what is new. Many are not used to sharing information with others and a change of mindset is required if we are to move forward in this area. As far as autonomous shipping is concerned, this is still right at the beginning of its development.

One question raised in connection with automation is what happens to the jobs. Here too, I think you have to think in new ways. Some jobs are disappearing while other jobs are being created.